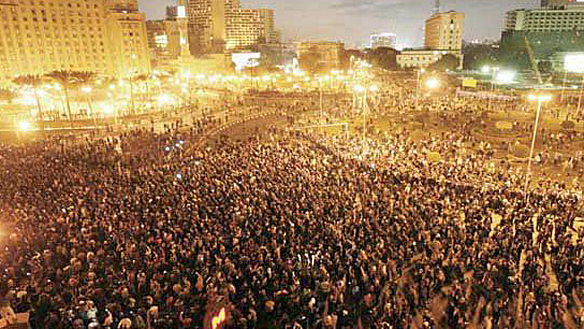 The unrest which started in Tunis is spreading like a jungle fire. It has traveled to Egypt at the speed of an epidemic. Libya, Jordan and Yemen could be the next possible destinations of this fast-moving freight train. While the protests which triggered the revolution in Tunis started for pure economic reasons, those in the Altahreer Square have a different background but tyranny of the long-serving regimes is common in the events leading to unrest both in Egypt and Tunis. This tyranny is present in Syria and other Muslim countries too and it is only a matter of time that the region will be turned into a fire-ball. Beleaguered President of Egypt is scaring his countrymen that if he goes the country will be taken over by the Ikhwan, an Egyptian equivalent of Taliban or al Qaeda.  Protests over crippling prices and corrupt leadership are sweeping much of the Islamic world, but the leadership in Pakistan has blithely dismissed any threat to its longevity or to the country’s stability.

Pakistan is an ideal candidate for this revolution but the optimism of the leaders is not wholly misplaced either. The leaders have one reason not to lose their sleep; Pakistani media can stand between the country and a revolution. It provides ample space for releasing the steam otherwise Pakistan has all the ingredients for revolution; corruption, poverty, total submission to the USA, insurgency and what not. The most frustrating factor is the apathy of their “elected” representatives who unite only on the question of their parliamentary perks whether or not they earn them. The Parliament is a total disappointment for the people. According a report which appeared in today’s edition of  The New York Times, Pakistani Parliament remains dominated by the families of a favored few, who use their perch to maintain a corrupt patronage system and to protect their own interests as Pakistan’s landed and industrial class. The government takes in little in taxes, and as a result provides little in the way of services to its people.

According to the report, food inflation totaled 64 percent in the last three years. The purchasing power of the average wage earner has declined by 20 percent since 2008, he said. Families are taking children out of school because they cannot afford both fees and food. Others choose between medicine and dinner. A middle-class customer in a pharmacy in Rawalpindi, the city where the powerful army has its headquarters, told the pharmacist last week to sell him only two pills of a course of 10 antibiotics because he did not have enough money for groceries. The most popular fuel for home cooking, gas, has been severely rationed this winter. Gas supplies to power textile mills in Faisalabad were suspended this week, leaving about 400,000 workers without their daily wages. At the same time, joblessness has soared. The true unemployment rate was 34 percent, meaning 18 million people, mostly young, were officially seeking jobs in Pakistan. Many of these jobless young men are products of religious schools, known as madrassas, run by radical clerics who favor Islamist teachings and an anti-Western creed. For the last 15 years, according to a government estimate, two million young men have passed through them, many then scooped up by the Taliban, Lashkar-e-Taiba and other militant groups.

In a sign of the anxiety among politicians about the mood on the street, the government decided Monday not to raise gas prices as scheduled. In January, to stave off the collapse of its parliamentary majority, the government similarly canceled a 9 percent fuel increase. In combination with the failure of members of Parliament to raise taxes on themselves, the steps have done little to heal Pakistan’s budget woes. Fiscal deficit would reach 8.5 percent of the gross domestic product by midyear, nearly double the target set by the International Monetary Fund. But Pakistan has become the nuclear-armed version of “too big to fail.” It has been made easier for politicians to balk at hard economic choices knowing that the I.M.F. and the United States — which is now providing about $2 billion a year in assistance — will continue to bail them out.

Tunisian revolution seals the fate of other autocratic regimes.

2 thoughts on “Pakistani media stands between the country and a Tunis-type revolution….”