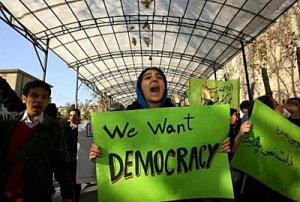 The popular uprising in the Middle East and North Africa, right in the backyard of Iran, was supposed to have entered Iran by this time. Barring a few protest demonstrations dealt with iron hand by the Iranian government, there is no visible threat to the government of the Islamic Republic. And Iran is happy over the developments; it admired the protesters of Egypt and called it a victory of Islamic forces. These developments gave Iran a historic opportunity of entering its naval fleet through Suez first time since 1979. With the US watching passively, the balance of influence and power in the Middle East is tilting in favor of Iran. Just a decade ago, says a recent report of Foreign Policy, the United States had cultivated what American policymakers like to call a strong “moderate” camp in the region, encompassing states reasonably well-disposed toward a negotiated peace with Israel and strategic cooperation with Washington: Egypt, Jordan, Saudi Arabia and the other Persian Gulf states, as well as Morocco, Tunisia, and Turkey. On the other side, the Islamic Republic had an alliance of some standing with Syria, as well as ties to relatively weak militant groups like Hamas and Hezbollah.

As a result of the Iraq war, the collapse of the Arab-Israeli peace process, and some fairly astute diplomacy by Iran and its regional allies, the balance of influence and power across the Middle East had shifted significantly against the United States. The relations between Damascus and Tehran became increasingly strategic in quality. Turkey, under the Justice and Development Party (AKP), was charting a genuinely independent foreign policy, including strategically consequential partnerships with Iran and Syria. Hamas and Hezbollah, legitimated by electoral successes, had emerged as decisively important political actors in Palestine and Lebanon. It was looking progressively less likely that post-Saddam Iraq would be a meaningful strategic asset for Washington and ever more likely that Baghdad’s most important relationships would be with Iran, Syria, and Turkey.

U.S. allies like Oman and Qatar were aligning themselves with the Islamic Republic and other members of the Middle East’s “resistance bloc” on high-profile issues in the Arab-Israeli arena — as when the Qatari emir flew to Beirut a week after the 2006 Lebanon war to pledge massive reconstruction assistance to Hezbollah strongholds in the south and publicly defended Hezbollah’s retention of its military capabilities. Public opinion polls, for example, continue to show that the key leaders in the Middle East’s resistance bloc — Iranian President Mahmoud Ahmadinejad, Syrian President Bashar Assad, Lebanon’s Hassan Nasrallah, Hamas’s Khaled Mishaal, and Turkish Prime Minister Recep Tayyip Erdogan — are all vastly more popular across the region than their counterparts in closely U.S.-aligned and supported regimes in Jordan, the Palestinian Authority, and Saudi Arabia. And if current pro-US leaders of Bahrain, Egypt, Tunisia, Yemen, survive popular uprising, they will no doubt become less enthusiastic about strategic cooperation with the United States and are likely to be at least somewhat receptive to Iran’s message of “resistance” and independence from Israel and the West.

According to Foreign Policy report, over the next year, all these developments will shift the regional balance even more against the United States and in favor of Iran. If Jordan — a loyal U.S. client state — were to come into play during this period, that would tilt things even further in Iran’s direction. The media and think tanks were predicting upheaval in Iran since 2009 election but the Green Movement could not succeed in bringing down the Islamic Republic, for two basic reasons: The movement did not represent anything close to a majority of Iranian society, and a majority of Iranians still support the idea of an Islamic Republic. Two additional factors are in play today, which make it even less likely that those who organized and participated in scattered demonstrations in Iran over the past week will be able to catalyze “regime change” there.

First, what is left of the Green Movement represents an even smaller portion of Iranian society than it did during the summer and fall of 2009. The failures of defeated presidential candidates to convincingly document their assertions of electoral fraud and the Green Movement’s pivotal role in the West’s progressive demonization of the Islamic Republic since June 2009 have not played well with most Iranians inside Iran. Second, the effort to restart protests in Iran is taking place at a moment of real strategic opportunity for Tehran in the Middle East. The Iranian people, therefore, are not likely to recognize as their political champions those whom they increasingly perceive as working against the national interest. Consequently, the reformists are now in danger of being associated with an increasingly marginalized and discredited opposition movement that is, effectively, doing America’s bidding.

The United States faces serious challenges in the Middle East. Its strategic position in this vital part of the world is eroding before our eyes. Indulging in fantasies about regime change in Iran will only make the situation worse, says Foreign Policy report.

It still pays to be on the wrong side of the USA….

Iran and the USA are, in effect, natural allies….