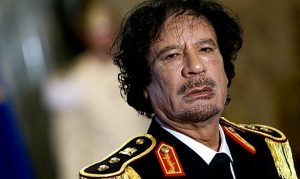 It was during Libyans’ fight against the occupation forces of Italian colonists when a young teen-age girl, Fatima appeared in the battle scene to inspire the fighters so much so that her heroic deeds during the war were immortalized by no other than Allama Iqbal, a great philosopher poet of the 20th century. Inspired by Fatima bint Abdullah, Iqbal felt the tremors of a coming revolution which was to shake the foundations of colonization in Libya and elsewhere within a period fifty years. Nearly a century later, Libyan rebels fighting Qaddafi’s tyranny have found their inspiration in a latter-day Fatima, a fully veiled tiny woman, who could have been prosecuted in France or even in Tunis for wearing the veil but she is keeping the hope alive for the Libyan. Nayla Mohammed El Farisi is a writer and charity worker whose brother was killed in prison 15 years ago. She says she is not doing this for personal revenge, but because this is the sound of her conscience.

The Christian Science Monitor found her hustling around a makeshift newsroom in the North Benghazi Courthouse wrapping up 10-hour days writing articles for a newspaper created to criticize Qaddafi. Like the rest of Libya’s 6.5 million citizens, Farisi has never before been able to speak out against the government, which has caused her family hardships for decades. She and her family are doing all they can to help put an end to the dictator’s regime. And the veil is no hazard for her.

“Just because I’m dressed like this doesn’t mean I can’t do anything,” says Farisi, who wears a long, dark dress and her face is fully veiled, her hands hidden by gloves as a sign of religious piety. She knows how to use a gun, she volunteered at the beginning of the revolution as a medical assistant in the hospital, and now is working with a charity. In the judges’ retiring-room-turned-news bureau where Farisi is playing her part in the rebellion, she sat on a recent evening with a picture of her brother, Said Mohammad El Farisi, hanging from a string around her neck.

The electrical engineer was killed when he was 32 years old. The family’s struggles began in December 1988 when the Libyan secret service stormed Farisi’s home. She was just 22 years old as she watched agents destroy Said’s room and raid his Islamic book collection. They stole a picture of the young man, who was in Turkey at the time buying furniture for his soon-to-be bride. Two days later, Farisi’s father received a call informing him that Said was arrested at the airport for being too religious, prompting her sister to have a psychological breakdown.

For years Said remained in prison without any way to contact his family. But he wasn’t the only one who faced trouble at the hands of authorities. Her two brothers are arrested at least once a month. They are arrested and released, arrested and released. This has been happening since 1989. Without any word from her brother for more than seven years, Farisi’s family heard rumors about a mass killing at Tripoli’s Abu Salim prison in 1996. “But we didn’t know the truth,” she says. Her mother went to Tripoli every month to find out what happened to Said. “But she always came back devastated. She had no information.”

Farisi’s father finally received a call in 2001. He hung up the phone, picked up a picture of Said and cried. “All he did was tell my mother that he didn’t think she would see her son again.” Before Farisi could learn why, her father started shaking and said he felt ill. He died that night.
A second phone call came from the government nine years later telling the family that Said died in the Abu Salim prison. Eyewitnesses reported that security forces fired at men packed into a courtyard after they rioted for improved living conditions. One fellow prisoner who has since been released told Farisi that Said, who was in need of medical care, was put on a bus with other ill prisoners and transported away from the courtyard and killed. Human Rights Watch estimates that more than 1,200 people were massacred. Like other families of victims, Farisi’s was offered a settlement of 200,000 Libyan dinars ($164,000). The offer was turned down by the family.

This is not a one-woman army fighting Qaddafi but her role is critical in the fight against tyrannical rule of a mad dog. Farisi and her family can’t do enough to ensure Qaddafi’s ouster. But she is the one who inspires and who keeps the hope alive.