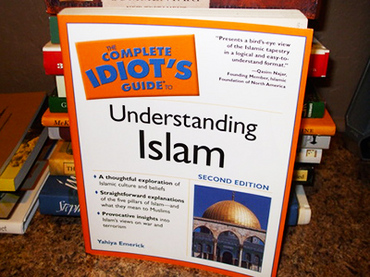 The extremist thinkers of the West (read: Islamophobe ideologues) are having tough time in describing the brutal massacre of Norway. They are struggling to find suitable phrases to describe this gory incident. Some were quick to attribute the massacre to Muslim terrorists but soon, they had to eat their words. Others described this act as a personal lunacy of a misguided youth. No one was ready to describe him as a Christian terrorists or at least a Christian extremist; for terrorism, in their enlightened view, is synonymous with Islam alone.  Apart from the fact that this crime was provoked in the same way the acts of terrorism are provoked, it will be interesting to note that those dealing with Muslim extremists are trained about Islam in such a way that they are swayed more by Islamophobic propaganda than truth. For example, the training material consisting of slide show presentation for FBI operatives has a recommended reading list which included the”Complete Idiot’s Guide to Understanding Islam” and “The Politically Incorrect Guide to Islam.” FBI officials were also instructed that Muslims were simple folk with seventh century ways.

“Based on this presentation, it is easy to see why so many in law enforcement and the FBI view American Muslims with ignorance and suspicion,” says Farhana Khera, executive director of Muslim Advocates. “The presentation appears to treat all Muslims with one broad brush and makes no distinction between lawful religious practice and beliefs and unlawful activities.”

Were the FBI and the Oslo butcher reading the same training material? Breivik’s world view was certainly not his own, he was obviously inspired by extremist thinking of those who are no different from the Muslim ideologues preaching blood in the name of God.

There is, however, one stark and remarkable difference in reacting to the incident; while Muslims generally deny and blame such acts on conspiracy or worst glorify the acts of terrorism, the general European public unanimously condemned the act. Even the spiritual mentors of the killer distanced themselves from him.

According to a recent article of Foreign Policy, “one of the striking features of Anders Breivik’s worldview (which is shared by some of the Islamophobe ideologues who influenced his thinking) is the idea that he is defending some fixed and sacred notion of the “Christian West,” which is supposedly under siege by an aggressive alien culture.”

The article analyses the problems associated with this worldview (among other things, it greatly overstates the actual size of the immigrant influx in places like Norway, whose Muslim minority is less than 4 percent of the population). In addition, such paranoia also rests on a wholly romanticized vision of what the “Christian West” really is, and it ignores the fact that what we now think of as “Western civilization” has changed dramatically over time, partly in response to influences from abroad. For starters, Christianity itself is an import to Europe — it was invented by dissident Jews in Roman Palestine and eventually spread to the rest of Europe and beyond.

Moreover, even Christian Europe is hardly a fixed cultural or political entity. The history of Western Europe (itself an artificial geographic construct) featured bitter religious wars, the Inquisition, patriarchy of the worst sort, slavery, the divine right of kings, the goofy idea of “noble birth,” colonialism, and a whole lot of other dubious baggage. Fundamentalists like Breivik pick and choose among the many different elements of Western culture in order to construct a romanticized vision that they now believe is under “threat.” This approach is not that different from Osama bin Laden’s desire to restore the old Muslim Caliphate; each of these extremists is trying to preserve (or restore) an idealized vision of some pure and sacred past, based on a remarkably narrow reading of history.

In fact, any living, breathing society is driven partly by its “inner life,” but also inevitably shaped by outside forces. Indeed, as Juan Cole notes in a recent post, most societies benefit greatly from immigration, especially if they have strong social institutions (as Norway does) and the confidence to assimilate new arrivals into the existing order while allowing that order to itself be shaped over time. What is even more striking about conservative extremists like Breivik is their utter lack of confidence in the very society that they commit heinous acts trying to defend. On the one hand, they think their idealized society is far, far better than any alternative, which is why extreme acts are justified in its supposed defense. Yet at the same time they see that society as inherently weak, fragile, brittle, and incapable of defending itself against its cruder antagonists.

This is really an old story: American hard-liners used to believe that the decadent Western democracies couldn’t stand up to Soviet communism, and earlier generations all believed that the current wave of immigrants would bring some sort of fatal infection to an otherwise healthy body politic. We’ve suffered a similar wave of paranoia since 9/11, somehow believing that a handful of radicals in Central Asia posed a mortal threat to a society with 300 million people and a $14 trillion economy. (Of course, the real threat turned out to be the self-inflicted wounds that we suffered in Iraq, Afghanistan, and on Wall Street.) By contrast, those of us who are more sanguine about such matters have greater confidence in the inherent strengths of a liberal society and are more worried about departures from these principles undertaken in the name of “national security.”

Finally, to what extent can Islamophobes like Pamela Geller or Robert Spencer be held responsible for Breivik’s act? None of these hawkish pundits openly advocated violence, and all have (for the most part) distanced themselves from Breivik’s act. But it is also clear that their writings consistently portrayed Islam in a crude and monolithic way and tended to depict all Muslims as part of some looming threat to core Western values. And it seems clear from Breivik’s manifesto that these writers did have a considerable impact on his worldview, even if they did not advocate the horrific response that he chose. Yet this seems to have sparked little or no self-reflection on their part, as befitting the committed ideologue.

It is clear from Breivik’s own statements that his thinking was shaped by the various Islamophobic writers whose work he cites (and whose websites he patronized and posted on). He wasn’t dreaming up terrorist plots 20 years ago and then citing these writers after the fact to justify it; on the contrary, these works apparently helped convince him that radical violence was necessary in part because there was a looming danger to “the West.” Geller, Spencer, and their ilk are not responsible for his specific decisions and actions, of course, but they do bear some responsibility for creating and promoting a vision of cultural conflict that makes such extreme responses more likely.

Error: Twitter did not respond. Please wait a few minutes and refresh this page.