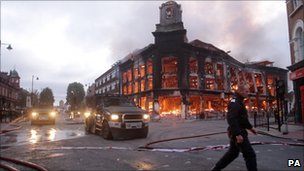 London is not merely a major city of Britain; it is heart-throb of nearly half of the humanity. It has a unique kind of romanticism attached to it and every second person living on the planet yearns to go and visit this city at least once in his life time. The unprecedented outbreak of rioting in London and then to other cities of Britain is upsetting because it seems to have gotten out of control. The unabated rioting is casting serious doubts on the ability of the Police to provide security for the upcoming London Olympics, 2012. TV footage of law enforcers standing and watching helplessly as teenagers smashed and looted shops have puzzled the public. The frustrated youngsters are rioting with full force in clear view of media bringing the image of Scotland Yard to disrepute. What should the Police do; hang them, flog them or ignore them. The answer lies somewhere in between. But before they do anything to control the situation, they must seriously take stock of the reasons behind the rioting.

Was the death of Mark Duggan the sole reason to trigger the rioting or the youth was trying to vent their anger and this was a rare opportunity offered by a trigger happy-cop? What should the law-enforcers do to bring the situation under control?

According to a report in Guardian, the Met was considering using baton rounds. But there is huge debate among the police leadership about the wisdom of such a move. The loot and arson go on unabated as does the apathy of the law enforcers. But Police is helpless for so many reasons because there are people as young as 11 being arrested for looting. Police have to be very careful about what device they use and how they are using it.

According to the report, baton rounds can only be “deployed”, or, given to officers to use, on the direct orders of the commissioner of the Metropolitan police. They have never been fired on the British mainland. Outside London, a chief constable is required to authorize their deployment. Specially trained officers attached to C019, the elite firearms unit, fire the single baton rounds from devices that look like shotguns.

Brian Paddick, Scotland Yard’s former deputy assistant commissioner, who has trained in the deployment of baton rounds, said: “If you believe you are losing control of the situation, it is a legitimate tactic. They are quite effective in dispersing crowds. The advantage is you can put a lot of distance between you and the crowd. The downside is, if you hit someone in the wrong place you can kill them.”

One senior officer, involved in drawing up plans to quell riots in his area, said he would favor authorizing use of baton rounds if they were needed. “When you’ve got a big crowd who are intent on over-running your officers, I don’t see the big deal in using them. You can withdraw or use baton rounds, which are more under your control than using dogs. I don’t see it as crossing a Rubicon for British policing – it’s much better than a baton charge where you can’t control the level of violence officers’ use.”

Paddick explained how the devices would be used in London: “There is a public-order commander on the ground who sends a message to the commissioner that all conventional means to contain the crowd has failed. The commissioner then gives the designated senior officer authority to use them. “When the DSO, having been given the authority, believes the situation is beyond conventional means, they can then be used.”

Paddick said the weapons had been issued, every year for at least the last 10 years, for the Notting Hill carnival, in London. “It is there, if there is a riot and conventional tactics can’t contain the violence.”

For police the scale and intensity of the recent riots are creating a need for new thinking, in a race against time to quell the unrest. One source said: “It is beyond the experience of anything we have experienced. If a bomb goes off we know what to do. This is as highly challenging as anything could be.”

Nobody has a fair idea how the rioting was triggered and if it was triggered by the shooting down of Mark Duggan by the Police, was this murder justified, or at least warranted.

ABC News recalls the incident on the night of Thursday, Aug. 4, when a 29-year-old father of four with reported links to London gangs was shot and killed by officers in London’s Scotland Yard. The riot is believed to have grown out of a peaceful vigil in the London neighborhood of Tottenham for the death of Mark Duggan that quickly spiraled out of control. London’s Metropolitan Police declined to answer questions about what exactly occurred the night Duggan was gunned down, but an investigation by the Independent Police Complaints Commission (IPCC) revealed today that when Duggan was killed, he likely had never fired on police.

According to an account provided by the IPCC, Duggan was a passenger in a minicab when the cab was stopped Thursday evening by submachine gun-toting officers from Scotland Yard’s Operation Trident — a special operation “dealing with gun crime among black communities, in particular drug-related shootings.”

What happened next is unclear due to conflicting reports by the IPCC and London-based media, which only have basic facts in common: multiple shots were fired, at least one bullet was lodged in a police radio worn by one of the officers and when it was over, Duggan was dead. Based on the IPCC account, two shots were fired by a single officer. Later, after Duggan was pronounced dead at the scene, the IPCC said a post-mortem examination revealed he had been shot in the right arm but was felled by a single shot to the chest. A non-official handgun was recovered from the scene, but it did not appear that gun had been fired, the IPCC said.

One witness, quoted in the London Evening Standard, said that police shot Duggan dead as he lay on the ground.

“About three or four police officers had both men pinned on the ground at gunpoint. They were really big guns and then I heard four loud shots. The police shot him on the floor,” the witness said.

In an earlier IPCC statement, the commission pushed back against the idea Duggan had been executed.

“Speculation that Mark Duggan was ‘assassinated’ in an execution style [incident] involving a number of shots to the head are categorically untrue,” the IPCC said.

The officers involved in the shooting reportedly described Duggan as having made a movement like he was drawing a gun before he was shot, according to The London Times. There are conflicting accounts narrated by the witnesses.

Semone Wilson, a 29-year-old woman reported to be Duggan’s fiancée, told several news outlets she had received a text message from Duggan approximately 15 minutes before the shooting, in which he said the “Feds” were following him. Close relatives of Duggan provided a glowing description of Duggan, father to four children as a good family man. Wilson told Channel 4 News Duggan was not the gangster he had been described to be and said she knew Duggan would not have fired on police. But both Duggan’s Facebook page and other media reports allegedly show connections between Duggan and a well-known London gang, according to The Guardian. The Voice, Britain’s leading black newspaper, wrote that Duggan and his best friend both were “linked” to Tottenham’s Star Gang. Still, according to The Voice, friends described Duggan and his friend as “fun-loving party boys” who were well-known in London’s rave scene, but not hardened gangsters.

The rioting should be controlled with full force to protect lives and properties but the government should ponder over the forces out to take advantage of such situations. Nearly half of the world is in love with London and every one of them is upset on the events unfolding there. The city must be brought to normal at all costs. Once the disturbance is quelled in London, rest of the cities will calm down.