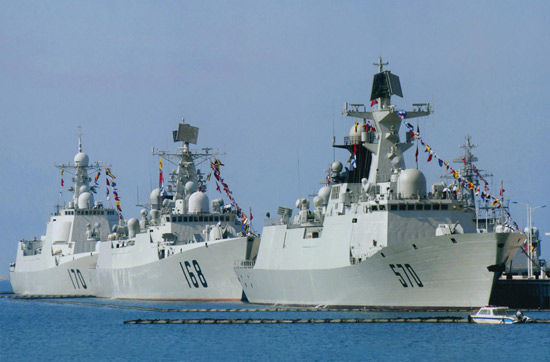 It is the power of economic numbers that makes countries powerful, or super powers, and not the number of its military personnel. As a matter of fact, the super powers in human history gained their distinctions on the basis of the power of their GDP; the power to sustain military might. Without a robust and growing economy, the military power comes to a naught.

Economic power can be defined broadly as the capacity to influence other states through economical means. It is composed of a country’s industrial base, natural resources, capital, technology, geographic position, health system and eduction system. Military power on the other hand is the capacity to use force or the threat of force to influence other states. Components of military power include number of divisions, armaments, organisation, training, equipment, readiness, deployment and morale.

A stable economy, therefore, figures most prominently in a nation’s power potential and consequently in its security calculus. All a state needs to purchase arms in the international marketplace is hard currency. This allows states with economic power to easily obtain military equipment. While the other aspects of military power like training and morale are harder to obtain through conversion of economic resources, it is not impossible. A well financed force is able to send members overseas for training and pay its members well. A highly paid soldier is likely to exhibit a high standard of professionalism and have high morale. If a state has the economic resources it should be able to increase its military power.

The most recent example is that of former USSR which had more fighter jets, more elaborate space program, more subs and a powerful surface fleet, yet it crumbled because its economy had lost its force by the end of Afghan war. The war was perpetuated by design to bleed the Soviet economy to such an extent that its currency was no longer able to pay for the costs of a sustained war. According to an article on an online publication, the Soviet Union employed a more unbalanced strategy towards the growth of its military power. Soviet military industries directly employed 10 million people including the most highly trained scientists and the best educated workers. The military segment of the economy accounted for 25% of the Soviet Union’s gross national product and half of all manufacturing in the Russian republic was devoted to the military. This mindset relegated the expansion of economic power to a second order priority. While this strategy worked well for close to thirty years in the long run it was a failure. By the 1980s the Soviet economy had deteriorated to such an extent that it could no longer support the Soviet military machine let alone help increase the country’s military power.

American adventure in Afghanistan and Iraq brought its economy to knees; and today the US is the most indebted nation. The issue of debt ceiling exposed its vulnerability.

If, therefore, nations want to build their military machines and ensure peace on their borders, they must build their economy. In fact, a better-managed economy could ward off threats to its national security. These threats normally originate from economic deprivation as the unhappy populace itself is a great risk to the national security than any external threat. This thesis was recently brought home by United States Institute of Peace which says in its report that when it comes to creating stability and solving the world’s security problems, it may be counterintuitive that a military man believes in the power of the economy – and not the military. But indeed he does.

Quoting from a senior US military man, Col. Kevin McDonnell, retiring this month after 26 years in the Army’s Special Forces community, the report says that he has thought a lot about the conflict zones to which he’s deployed and how the next generation of soldiers can avoid them. After a decade of war, the U.S. military doesn’t want the job as world policeman, and seasoned officers like Kevin actively work to remain, essentially, unemployed.

“On a macro level,” he says, “the greatest influence this country has is economic, not military,” McDonnell told USIP’s International Network for Economics and Conflict blog (INEC) recently. “But it’s the military tool that we’re quickest to swing because it generally produces the fastest results. Economic seeds take longer to grow.”

McDonnell is good an example of how thinkers in the military see the convergence of peace, stability and economics. But he spoke for himself as a career military officer serving in Special Forces, and not for the Pentagon, the military at large or the Special Forces community. In his Pentagon office, McDonnell has large maps that show some of the world’s danger zones that include countries with haves and have-nots, but “mostly significant have-nots” as well as kleptocracies where corruption is rampant.

Like many who study conflict, military leaders like McDonnell are keenly aware of how economic opportunity can be used to manage conflict or prevent violence in unstable regions. And now they’re trying to do something about it by speaking out more and more about that link.

He and other top military officials this year visited Kellogg Graduate School of Management at Northwestern, where they spoke with MBA students about how the worlds of economics and national security intersect. “There is an emerging view inside the Defense Department that the traditional tools of national security aren’t as effective at getting us where we want to,” McDonnell recalls them telling the students. “When we look at the construct of the world today and how it might develop tomorrow, we find overlaps of national security and the private sector and commerce; there is more in common.”

But the economic development has to be legitimate and sustainable. So shoveling money into a country like Mali to help it fix its “al-Qaida problem,” as McDonnell calls it, doesn’t necessarily do the trick. Instead, creating real commerce by marrying a country’s inherent resources, both natural and mental, with outside investment to become a “tool of stability,” does. The key is finding ways to bring the two sides together. Paul Brinkley sees his job like that of eHarmony, the online dating service. Brinkley, a former deputy undersecretary at the Defense Department, is well known in these circles as the military’s point person for economic development in conflict zones having worked for years in Iraq and now Afghanistan. He has brought leaders from companies as diverse as clothing retailer Kate Spade to Honeywell to the warzones to get them to see the opportunity that exists there. A Bloomberg News article profiling Brinkley in January summed it up: “Where most people see violence and misery, Brinkley sees potential.”

It’s about taking the private sector’s eyes and opening them, Brinkley said at the time. “I’ve never regretted taking a businessperson to the theater,” the article quotes him as saying. “This is about getting their eyes on the problem.”

The United States Institute of Peace’s Raymond Gilpin, an associate vice president who oversees the Sustainable Economies Centers of Innovation notes that no one tool is the silver bullet for post-crisis and post-conflict regions. A balanced approach between the long-term stakeholders is the best answer. “Although the military has a unique role to play (being first responders), a strategic partnership between public institutions and the private sector will be most sustainable and cost-effective,” he writes in an e-mail.

But as those first responders, the military has a large interest in sustainable economies around the globe and officers like McDonnell want to do whatever they can to support them. All of this is increasingly important today. The reality is that the world that lies in the immediate future for this next generation of military men and women is one of peril and danger – but also federal debt reduction and cost savings. That means the U.S. isn’t likely to deploy forces anytime soon on the scale of Iraq or Afghanistan as diplomatic, military and development budgets are being slashed. Much in the same way that the green investor movement has grown out of necessity in recent years – people like McDonnell see the expeditionary economic movement taking off.

But this high-risk, high-yield world of frontier investment still takes investors with the right mind-set. They must be animated not only by their need for profit, but be guided by a greater need to do the right thing. McDonnell believes Wall Street is poised for this kind of investor call for action. “There are ways to do good and make money,” says McDonnell. “They are not mutually exclusive.”

The glowing example of living beyond means and spending recklessly on military is of India whose population is one of the most poor in the world. It needs to feed its hungry, before it feeds it hegemonic ambitions.

One thought on “Economy is more powerful than a powerful military….”