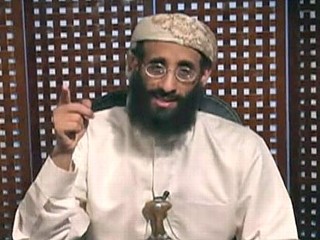 Predator drones, used to kill terrorists with impunity, are legally not permitted to kill US-born terrorists. The US Constitution is very clear on this. The Constitution, however, implicitly encourages killing of non-Americans, terrorists or otherwise, guilty or innocent, men or women, young or old, without due process of law. God bless America. Americans are free to kill terrorists, even children and women. That is not a crime; because that is not just killing; it is war where children, women and innocent are not killed, their killing constitutes just collateral damage.

Please also read: Show me your passport, I’ll show you your rights….

However, killing a known terrorist, a strategist of al Qaeda without due process of law, is the gravest of crimes. These drones need to be programmed to check the passports of terrorists before killing them. The killing of al Qaeda terrorist, Anwar al-Awlaki in Yemen this week raises questions about the legal authority under which the US Government can target its own citizens for assassination. According to Christian Science Monitor, the American-born radical cleric Awlaki – a recruiter for Al Qaeda in the Arabian Peninsula said to have inspired alleged Ft. Hood shooter Maj. Nidal Hasan and other homegrown Islamic terrorists – was killed in a US drone strike Friday. Also killed in the attack was American-born Samir Khan, editor of Al Qaeda’s English-language magazine “Inspire.”

Civil libertarians and some constitutional scholars say what amount to targeted assassination of US citizens cannot be justified – even in wartime. What’s to prevent the government from killing terrorist suspects on US soil, they ask?

US officials point to evidence that Awlaki played a significant operational role in several plots, including the failed attempt by so-called underwear bomber Umar Farouk Abdulmutallab to bring down a Detroit-bound airliner on Christmas Day 2009.

As first reported in the Washington Post, this led to a secret Justice Department memorandum last year justifying efforts to capture or kill Awlaki. Capturing him would have been extremely difficult if not impossible in Yemen, so the US effort became a targeted killing.

Texas Rep. Ron Paul, who is running for the Republican presidential nomination, cried foul Friday over the killing of a radical U.S.-born cleric in Yemen without a trial, joining a chorus of civil liberties groups raising “due process” concerns over the drone attack. Rep. Dennis Kucinich, D-Ohio, joined Rep. Paul in condemning the killing of al-Awlaki, saying the Obama administration had “crossed a dangerous divide and set a dangerous precedent for how the United States handle terrorism cases.”

The largest Muslim advocacy group in the nation responded to news of Awlaki’s death by rejecting his calls to violence, though the group also raising the “due process” concerns that were amplified by other civil liberties groups. Other groups were even more direct in their criticism of the killing of al-Awlaki in a U.S. drone attack in Yemen.

The Center for Constitutional Rights, which had previously brought a challenge in federal court to the legality of the authorization to target al-Awlaki in Yemen, called the assassination by drone attacks “the latest of many affronts to domestic and international law.”

Micah Zenko, a Council on Foreign Relations fellow on conflict prevention, said the known evidence linking Awlaki to Al Qaeda operations is slim but that the intelligence agencies and military special forces involved in such a strike would be unlikely to disclose any detail that could compromise intelligence gathering and future targeted killings.

The aspiring terrorist should now manage to be born on the American soil to challenge any attempt on their life by the valiant drones.