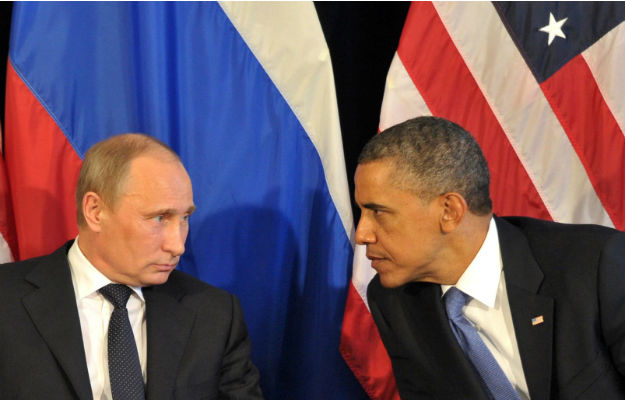 Those who have pressurized President Putin into postponing his Pakistan visit have done no good to the prospects of a peaceful Afghanistan after draw-down of foreign troops. This is a disservice even to a graceful exit for the NATO forces. According to media reports, President Vladimir Putin was to attend the quadrilateral summit of Afghanistan, Tajikistan, Russia and Pakistan in Islamabad which was scheduled for the 2nd of October. According to the statement issued by the Foreign Office, the quadrilateral summit has also been deferred and the new date will be announced later. The statement further says that the Russian President has written a letter to President Asif Ali Zardari and expressed his desire to boost economic ties with Pakistan. The letter also expressed hope that both the leaders will hold meetings in future.

Americans and Indians were unhappy from the day Putin had announced his intended trip to Pakistan, first ever after his reelection as the president. His trip could open avenues for repair of Pak-Russia ties after a bitter past of the Cold War era when Pakistan was in American camp and India was Soviet ally. Americans and Indians had their own reasons to be wary of this high profile visit of the Russian leader. American could clearly see that with this trip, there were strong expectations of the four major stakeholders forging an alliance. This could mean that Afghanistan would slip out of American hands, for a longer period of time if not for ever. This could also mean loss of a frontline state that has been ready to serve American interests for any price, even on gratis basis. The only quid pro quo for serving American interests was supply of military hardware. Pakistan had realized a long time ago that this source of supply was drying up and was therefore, looking towards China for military supplies including fighter jets and naval platforms. Pakistan’s further alliance with Russia and supply of Russian hardware would free Pakistan from American clutches which Americans would not allow at any cost.

Indians are doing for the US what Pakistan has so far been doing from the days of Cold War. Additionally, India has always been active to isolate Pakistan internationally and has been jubilant at worsening ties of Pakistan and the US. It had even funded insurgents in restive tribal areas on Pakistani soil to create problems for China. Russian overtures to Pakistan and Pakistan being a part of quadrilateral summit would frustrate Indian designs on Pakistan. It refuses to recognize any role for Pakistan in post-NATO Afghanistan and has invested heavily in reconstruction of Afghanistan to acquire some foothold in that war-ravaged country.

Though India may not be wary of any Russian role in future Afghanistan, by pressuring Putin to postpone his Pakistan visit, India has undermined Russian interests in the region. Some analysts believe that Indians might have managed to frustrate Russian efforts to reach out to Pakistan and Central Asian states at the behest of the US. This is something American could not have done itself. It is believed that they used Indians to exert pressure on Russia. They have achieved twin objectives; keeping Russia away from Afghanistan and Pakistan thus safeguarding American interests and isolating Pakistan from rest of the world. For Americans, it is a good punishment for Pakistan for reaching out to Russia.