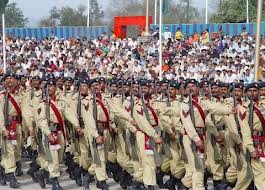 Idea in the modern day warfare is an effective weapon. Before winning a war in the battlefield, armies must win the war of perceptions and effectively counter baseless and negative propaganda. Pakistani army lost this war in East Pakistan but now it cannot afford a defeat in Balochistan. In Balochistan, it has to fight a joint force of foreign agencies, their media and a section of Pakistan’s own media hostile to Pakistan’s security establishment. The infamous six-points being glorified by the media are always a challenge for Pakistan’s security. These remind of the separatist designs of Sheikh Mujeeb who was caught conspiring against Pakistan and was interned. He was subsequently released under pressure from another dubious political character, ZAB when  Ayub Khan, in his twilight days, was losing his grip on the government.

There are certain other similarities between the Bengal insurgency of 1970 and Baloch insurgency of the present times. In both the cases, the Pakistan Army lost the war of perception; it failed then, and it is utterly failing now to convince the world that it has no role in the illegal detentions and murder. It was widely propagated then that army personnel were involved in the large-scale killing and rape. It was subsequently revealed by Bengali writers themselves that those found killing and raping were indeed Indian intelligence agents unleashed on innocent Bengalis. They were wearing Pakistan Army’s uniforms. The same thing is happening now in Balochistan. A perception has successfully been created that army personnel are involved in enforced disappearances of Baloch people. The judicial commission of missing persons has determined that the issue of missing persons was a handiwork of foreign agencies actively operating in Balochistan but the media on the payroll of anti-Pakistan elements is pressuring the judicial authorities to indict the security establishment.

Baloch insurgency poorly handled by ZAB in 70s through his defense minister was actually triggered by ZAB to have total control of the province where ANP was thrown up as representatives of the people. He wanted to dismiss the provincial government and install his hand-picked governor. Mr. Akbar Bugti addressed a PPP-sponsored rally in Punjab and accused the provincial government of receiving arms from Iraq to pursue separatist agenda by arming the insurgents. Mr. Bugti was rewarded with the governorship of the province and insurgency unleashed on the province. This insurgency had the active support of a neighboring country. It was subsequently controlled through political means when Bhutto’s government was overthrown by Gen Zia.

The current insurgency is stated to have been triggered by Bugti’s death which is factually incorrect. The Baloch sardars have always been blackmailing the government and extorting huge sums of money on regular basis. The previous government tried to fight the sardars for the hapless Baloch people which pushed the country into the present unrest. But the situation in Balochistan is far more different from that in East Pakistan. There is a small minority of insurgents fighting the state but this minority has not only enlisted sympathizers in national and international media, it has total support of foreign agencies of the countries like US, UK, India, Afghanistan and UAE. Will this minority be able to dent the national unity largely depends upon how Pakistani state and its institutions play their cards.

An excellent analysis has appeared in Opinion Maker penned by a retired soldier based on the information he collected from the most authentic military sources. According to this analysis, population of Balochistan is 8 Million out of which the Baloch and Brahvis are 4 Million, the Pathans 3.5 Million and settlers’ 0.5 Million. Within Baloch dominated areas, Sindhi-Balochs residing in Sibi and Jacobabad areas comprising Jamalis, Magsis are peaceful and friendly. Pat Feeder Canal and Katchi dam help them in their agriculture. Those living in Quetta and immediate surroundings are involved in business activities and smuggling and pose no threat to the federation. Pashtuns do not have the germs of separation. They are better educated and prosperous and are pro-Pakistan and do not subscribe to the Baloch separatist agenda. They are fully involved in cloth business, transportation and agriculture, fruit-growing and also in smuggling. Shia Hazaras are pro-Pakistan and do not support Baloch nationalists seeking separation of Baluchistan. People living along the Makran coast known as Makranis have made fishing as their main source of earning and except for a small number all are peaceful people. Sizeable number of Makranis has settled in Karachi (Lyari).

According to the statistics presented in the analysis, only those Balochs residing in Turbat and surroundings towards the coastal side are trouble makers. Their numbers do not exceed half a million and those who have shifted to the hills and are actively involved in terrorism are about 3500. Small portion of Baloch dominated Naushki is connected with Helmand province of southern Afghanistan. Naushki route, along which large desert patch acts as a barrier, was used as a supply route but has now been effectively blocked. Another route via Zhob through Pashtun belt is difficult for foreign agencies and Baloch rebels to frequent because of non-cooperation of the Pashtuns. Owing to demographic and geographic constraints, the small segment of trouble creators is in no position to achieve independence of Balochistan since it cannot generate the desired critical mass. The runaway Sardars trying to stir up Baloch nationalism and espousing the cause of independent Balochistan are unpopular and have no standing among the great majority of Balochs who are loyal to the concept of Pakistan.

The analysis presents some chilling details. MI-6 is the major foreign agency involved in Balochistan and is assisted by RAW, RAAM and CIA. Brig Neel, the Consul General in Indian Consulate in Kandahar helped by Afghan National Directorate of Security has been the major coordinator to keep the pot of insurgency in Balochistan on the boil. Like in East Pakistan, India’s focus has been on students and teachers of schools and colleges in Balochistan, particularly within Baloch dominated regions and Quetta. It has invested huge amounts to subvert the Baloch youth and make them anti-Pakistan. Indians invite Baloch teachers and professors to India and bribe them. RAW’s sustained efforts resulted in making the Baloch students sing their own Baloch national anthem, and hoist Baloch flags instead of Pakistan flag on school/college buildings. Hatred against Pakistan, Pak Army and Punjabis has been ingrained into the young and impressionable minds of Baloch students.

One reason of continuing deterioration of law and order in Balochistan is the reversal of Gen Musharraf’s policy of A and B Areas. Over 95% territory had been converted to A Area under police control which produced good results and helped in keeping law and order under control. The current provincial government reversed his policy in 2008 and handed over control of 95% territory to Levies and only 5% to Police. While 48% population resides in cities, 52% live in rural areas in Balochistan. The Levies are recruited from the Baloch tribes strictly on the recommendations of the Baloch Sardars. As such the Sardars exercise total control over the Levies. While the provincial police has been politicized and made ineffective, Levies are used by MPs as per their desires who are empowered to give salaries to them. The criminals after committing crimes in cities slip to B Areas, which are within grasping reach (half an hour to one hour distance), where the police cannot meddle.

Quoting his highly placed source, the analyst informs that military operations of all sorts were stopped in May 2008 under federal government’s orders once Aghaz-e-Haqooq-e-Balochistan package was approved. Since then no covert or overt operation has been conducted and not a single Army personnel is involved on any operational duty as is being alleged by some Baloch leaders. Frontier Corps wings are deployed along the Afghan-Iran border, while others are on protection duties and receive orders directly from the Interior Ministry. In addition to this and to total delight of anti-Pakistan forces, work on converting Kohlu and Sui into military cantonments has been stopped under Federal government’s orders and Sui garrison has been converted into Pakistan Educational City. The cantonments not only helped in promoting education and bringing prosperity, but also facilitated the Army to promptly respond to the natural disasters in affected areas as well as to foreign threats.

This analysis and the information provided therein is an eye-opener for Pakistanis in general and Baloch people in particular. Pakistan’s security establishment should aggressively pursue a campaign and correct the misperception created by a section of the media who is involved in glorifying the deeds of the likes of Bugti and his scion presently under the protection of Western agencies comfortably lodged in Switzerland. The idea is an effective weapon and it must be deployed before deployment of troops. Unfortunately, this task will have to be performed by the security establishment itself because the politicians of today are no different from the politicians of 1971.

4 thoughts on “Balochistan insurgency; The Army will have to win the war of perceptions….”