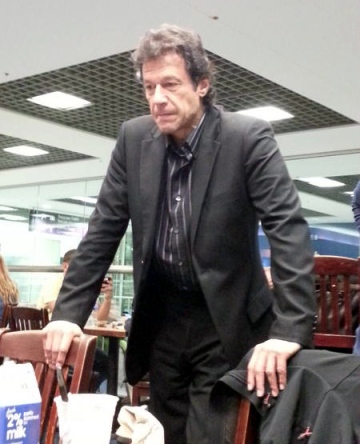 Everyone is entitled to his or her opinion and the civilized societies respect opinions even when they do not subscribe to it. Drones being used to kill terrorists may be a “cost-effective” military solution in the eyes of hawks in US administration but the fact that their collateral damage in the loss of innocent human lives is opposed and detested by many in the West does not mean that those criticizing this strategy are not honest in their opinion. The Americans are generally silent about their criticism but they do not seem to digest the criticism by a Pakistani politician critical of U.S. drone strikes. Imran Khan, the emerging popular leader of Pakistani politics was detained and questioned by American authorities at a Canadian airport Friday night. He was travelling to the US for a noble cause; fund-raising for his cancer hospital. Quite shamefully, he was removed from a New York-bound plane and interrogated on his views on drones.

Khan is accused of being a fierce critic of U.S. policy in Pakistan and the use of drone strikes, calling them a violation of Pakistan’s sovereignty and a strategy that stokes militant anger towards Washington. He even led a peace march to the restive tribal region to highlight the issue and his march was attended by a host of anti-drone American activists.

Whether or not the drones are an effective weapon to curb terrorism and kill the terrorists is a matter of opinion. Many, even in Pakistan, consider them the last resort to deal with the menace because the area where terrorists have established safe havens is not accessible by a regular army. But treating drone criticism as blasphemy is not at all in line with what the Americans are so proud of; the core values of the American forefathers.

If Imran Khan, a citizen of the country being targeted by the drones has to be treated the way like he was, then why not mete out a similar treatment to those who live in the US and criticize the drone policy. A series of feature articles over the last couple of days in the Washington Post and New York Times demonstrate how counterterrorism as practiced by the United States is subject to contradictory forces and trends. A series in the Post describes how the centerpiece of U.S. counterterrorism has become an increasingly institutionalized killing machine that appears destined to operate indefinitely against a continually replenished list of targets. A piece in the Times describes a backlash over the monetary expense and compromises to privacy and civil liberties, a backlash that seems strong enough to force changes in counterterrorist programs.

According to an article by Paul Pillar carried by different publications, the American nation has failed to assimilate some basic principles about terrorism and measures to counter it. One of those principles is that terrorism is not something with a beginning and an end. It is instead a tactic that has persisted throughout history. And yet the notion of a beginning and an end persists in thinking in this country about terrorism. The counterterrorism machine has gotten cranked up to run in ways that would not be acceptable to most Americans if it were to run forever, and yet there is no evident point at which, once turned on, it should be turned off. It was inevitable that a backlash would set in.

Related to this point is the prevalent, and equally mistaken, notion that fighting terrorism involves wiping out or incapacitating some identifiable set of people: “the terrorists.” That is the idea behind the hit lists and target matrices. The Post’s series depicts a U.S. counterterrorist effort that has become increasingly and narrowly focused on eliminating the people in the matrices rather than on what leads people to become terrorists and to get into the matrices in the first place. The United States, through its policies and actions, does a lot to affect which people, and how many people, become terrorists. Those actions include the drone strikes, with their collateral damage and power to enrage, that have become the preeminent means of elimination.

Another concept that is only slowly and belatedly being appreciated is that counterterrorism involves inherent trade-offs, between security and such things as civil liberties, personal privacy, and alternative use of public resources. The common absolutist attitude toward preventing terrorism, which was especially stark in the immediate aftermath of 9/11, has led most public discussion of the topic to be phrased in terms of what measures are necessary to do the job. But there is no “necessary” level. It is instead a matter of how much security to buy at what price. The answer to that can vary, and vary over time as the same population changes its attitudes. This is a lesson that is only being learned over time and as backlashes has set in.

Most of the important lessons about this subject still have not been assimilated by most of the American public. Over the next few years public support for counterterrorism probably will ebb and flow as it always has: sharply up after a terrorist incident, gradually down as the costs and downsides become more apparent with any incident-free passages of time. Such fluctuation will have little or no correlation with the pattern of actual terrorist threats or with a rational approach to countering the threats.

The dissenting voices cannot be silenced nor will the arrogance help. The only way to deal with the issue is to listen to and respect the differing opinions. Criticizing drones is not an act of blasphemy and those openly voicing against this should be respected even if their opinions are not acceptable.

3 thoughts on “Drone criticism is not an act of blasphemy….”