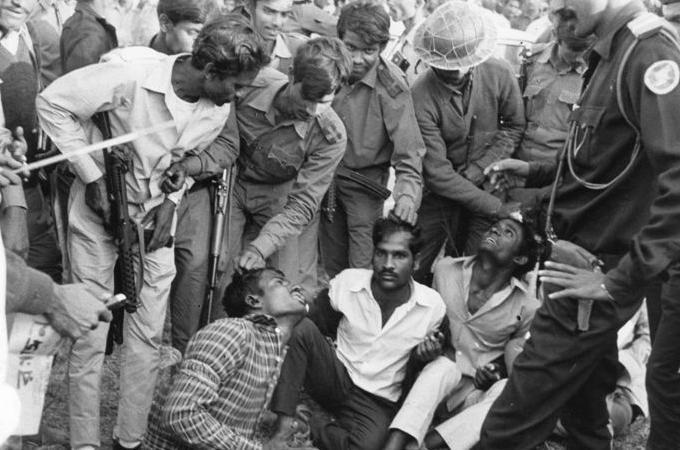 The 1971 war with India was internationally known as India-funded armed separatist movement, yet Pakistanis failed to press the point that RAW and its veritable arm, so-called Mukti Bahini, massacred around a million Pakistanis including pro-Pakistan Bengalis and non-Bengalis.

Pakistan’s government and its establishment have consistently lost the War of Perceptions. The 1971 war with India was internationally known as India-funded insurgency and armed separatist movement, yet Pakistanis failed to press the point that RAW and its veritable arm, so-called Mukti Bahini, massacred around a million Pakistanis including pro-Pakistan Bengalis and non-Bengalis. The news of these atrocities were blocked by government’s Information Ministry headed by a Bengali secretary.

According to credible and eye-witness account of historian Qutubuddin Aziz in his book, Blood and Tears, the Awami League militants had gained control over the telecommunications network in East Pakistan during the first few days of their uprising and they showed meticulous care in excising even the haziest mention of the massacre of non-Bengalis in press and private telegrams to West Pakistan and overseas world. Word of the mushrooming, organized violence against non-Bengalis in East Pakistan reached West Pakistan through the West Pakistanis who fled from the Awami League’s terror regime in planes and ships. But no newspaper in the Western Wing of the country dared report it in print. The Bengali Secretary, who headed the federal Ministry of Information and Broadcasting at Islamabad, threatened to punish those newspapers which at one time felt impelled to violate his Ministry’s fiat (of blocking the news).

There are certain factors and personalities who are directly involved in RAW’s plans to disintegrate Pakistan and there were partners we all know who volunteered their services for their short-term political gains. Mujib was under the patronage of RAW from 1960 who wanted him in power. He did sweep the elections and became the prime minister but died a tragic death at the hands of history survived only by his daughter now ruling Bangladesh. Indira Gandhi died at the hands of her most trusted Sikh bodyguard and her two sons also died unnatural death. The fate of Bhutto, who wanted to become the prime minister at all costs, and his family was no different. Yahya lived, and died, in disgrace in the aftermath of fall of Dhaka.

RAW’s plans could have been thwarted by the establishment but each time it took any step the power hungry politicians came in its way. The Agartala Conspiracy involving Mujib was a fact and a feather in the RAW’s cap but the case was not allowed to proceed to its logical conclusion. During the last days of Ayub’s regime, the politicians pressured the government to release Mujib and drop the case.

According to documented facts, Indian intelligence agencies were involved in erstwhile East Pakistan since early 1960s. RAW’s operatives were in touch with Sheikh Mujib for quite some time. Sheikh Mujib went to Agartala in 1965. The famous Agartala case was unearthed in 1967. In fact, the main purpose of raising RAW in 1968 was to organize covert operations in East Pakistan. As early as in 1968, RAW was given a green signal to begin mobilizing all its resources for the impending surgical intervention in erstwhile East Pakistan. When in July 1971 General Manek Shaw told Prime Minister Indira Gandhi that the army would not be ready till December to intervene in East Pakistan, she quickly turned to RAW for help. RAW was ready. Its officers used Bengali refugees to set up Mukti Bahini. Using this outfit as a cover, Indian military sneaked deep into Bangladesh. The story of Mukti Bahini and RAW’s role in its creation and training is now well-known. RAW never concealed its East Pakistan operations.

Interested readers may have details in Asoka Raina’s Inside RAW: the story of India’s secret service published by Vikas Publishing House of New Delhi. The creation of Bangladesh was masterminded by RAW in complicity with KGB under the covert clauses of Indo-Soviet Treaty of Friendship and Co-operation (adopted as 25-year Indo-Bangladesh Treaty of Friendship and Co-operation in 1972).

RAW retained a keen interest in Bangladesh even after its independence. Mr. Subramaniam Swamy, Janata Dal MP, a close associate of Morarji Desai said that Rameswar Nath Kao, former Chief of RAW, and Shankaran Nair upset about Sheikh Mujib’s assassination chalked a plot to kill General Ziaur Rahman. However, when Morarji Desai came into power in 1977 he was indignant at RAW’s role in Bangladesh and ordered operations in Bangladesh to be called off; but by then RAW had already gone too far. General Zia continued to be in power for quite some time but he was assassinated after Indira Gandhi returned to power, though she denied her involvement in his assassination( Weekly Sunday,Calcutta,18 September, 1988).

RAW was involved in training of Chakma tribals and Shanti Bahini who carry out subversive activities in Bangladesh. It has also unleashed a well-organized plan of psychological warfare, creation of polarisation among the armed forces, propaganda by false allegations of use of Bangladesh territory by ISI, creation of dissension’s among the political parties and religious sects, control of media, denial of river waters, and propping up a host of disputes in order to keep Bangladesh under a constant political and socio-economic pressure ( ” RAW and Bangladesh” by Mohammad Zainal Abedin, November 1995, RAW In Bangladesh: Portrait of an Aggressive Intelligence, written and published by Abu Rushd, Dhaka).

And Mukti Bahini was not all about “freedom fighters” alone. It was trained and led by RAW with RAW operatives manning this insurgent organization. It not only massacred non-Bengalis and pro-Pakistan Bengalis, it also killed and raped Bengali population wearing the uniform of Pakistan army to drive a wedge between people and the armed forces.

We are witnessing a similar situation in Balochistan where people are being kidnapped by insurgents wearing FC’s uniform. We have a vibrant media blocking the atrocities of insurgents but highlighting the “atrocities” of FC. The independent judiciary which owes its restoration to this media is paying back and, under media pressure, is hell-bent on indicting the armed forces. The enterprise of “missing persons” jointly owned by RAW and the media is flourishing.

It’s time the establishment had learned its lessons from its follies of the East Pakistan. It needs to have a strong arm to counter the perceptions created by anti-Pakistan elements. Balochistan with a deep-sea port threatening strategic interests of India and the US and commercial interests of UAE; and oil and gas reserves is the target of attention of all those who want to disintegrate Pakistan. The so-called Baloch nationalists have no legs to stand on if the free flow of arms and money is squeezed and stopped.

One thought on “1971: Massacre of Bengalis and non-Bengalis by RAW and Mukti Bahini….”