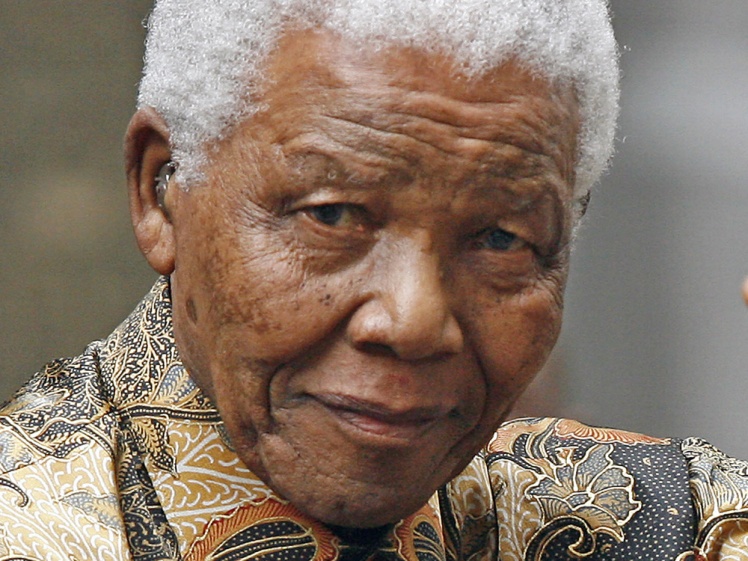 Mandela has given hope to the oppressed humanity and demonstrated, through personal example, the virtues of tolerance and forgiveness; the two attributes of world’s great leaders.

Nelson Mandela is in news again; this time for entirely wrong reasons. The shining star of our times who belongs to the galaxy of history’s great people is preparing to meet his peers. He is struggling to survive the deadly lungs’ disease in a hospital but looking at his age, he will one day meet the fate all great people meet, but death will not rob him of the aura and the greatness which make him an undisputed legend of 20th and 21st centuries. He fought a battle against the crudest of the injustices called apartheid. He personally suffered all the naked cruelties of inequalities and injustice but when his time came, he embraced his tormentors. What a great man this world is going to be deprived of.

According to biographical details obtained from credible sources, he was born as Rolihlahla Mandela on July 18, 1918 in Transkei, South Africa, in the tiny village of Mvezo on the banks of the Mbashe River in the province of Transkei. “Rolihlahla” in the language of Xhosa literally means “pulling the branch of a tree,” but more commonly means “troublemaker.” Mandela’s father was destined to be a chief and for years served as a counselor to tribal chiefs. But over a dispute with the local colonial magistrate, he lost his title and his fortune. Rolihlahla was only an infant at the time and the loss of status forced his mother to move the family to Qunu, an even smaller village north of Mvezo. At the suggestion of one of Rolihlahla’s father’s friends, he was baptized into the Methodist church and became the first in his family to attend school. As was the custom at the time, and probably due to the bias of the British educational system in South Africa, his teacher told him that his new first name would be “Nelson.”

In 1939, Mandela enrolled at the University College of Fort Hare, the only residential center of higher learning for blacks in South Africa. Fort Hare was considered Africa’s equivalent of Oxford or Harvard, drawing scholars from all parts of sub-Sahara Africa. In his second year, he was elected to the Student Representative Council (SRC). After completing education, Mandela directed a campaign of peaceful, non-violent defiance against the South African government and its racist policies, including the 1952 Defiance Campaign and the 1955 Congress of the People. He founded the law firm Mandela and Tambo, partnering with Oliver Tambo, a brilliant student he had earlier met at Fort Hare. The law firm provided free and low-cost legal counsel to unrepresented blacks.

In 1956, Mandela and 150 others were arrested and charged with treason for their political advocacy, though they were eventually acquitted. Meanwhile, the ANC was being challenged by the Africanists, a new breed of black activists who believed that the pacifist method of the ANC was ineffective. By 1959, the ANC lost much of its militant support when the Africanists broke away to form the Pan-Africanist Congress. In 1961, Mandela, who was formerly committed to non-violent protest, began to believe that armed struggle was the only way to achieve change. He co-founded Umkhonto we Sizwe, also known as MK, an armed offshoot of the ANC dedicated to sabotage and guerilla war tactics to end apartheid. He orchestrated a three-day national workers strike in 1961 for which he was arrested in 1962. He was sentenced to five years in prison for the strike, and then brought to trial again in 1963.

Nelson Mandela was imprisoned on Robben Island for 18 of his 27 years in prison. As a black political prisoner, he received the lowest level of treatment. However, he was able to earn a Bachelor of Law degree through a University of London correspondence program while incarcerated. A 1981 memoir by South African intelligence agent Gordon Winter described a plot by the South African government to arrange for Mandela’s escape so as to shoot him during the recapture. The plot was foiled by British intelligence. Mandela continued to be such a potent symbol of black resistance that a coordinated international campaign for his release was launched. This international groundswell of support exemplified the power and esteem Mandela had in the global political community.

In 1982, Mandela and other ANC leaders were moved to Pollsmoor Prison, allegedly to enable contact between them and the South-African government. In 1985, President P.W. Botha offered Mandela’s release in exchange for renouncing armed struggle; the prisoner flatly rejected the offer. With increasing local and international pressure for his release, the government participated in several talks with Mandela over the years, but no deal was made. It wasn’t until Botha suffered a stroke and was replaced by Frederik Willem de Klerk that Mandela’s release was announced in February 1990. De Klerk unbanned the ANC, removed restrictions on political groups, and suspended executions.

Mandela was elected president of the African National Congress in 1991 with lifelong friend and colleague, Oliver Tambo, serving as National Chairperson. Mandela continued to negotiate with President F.W. de Klerk toward the country’s first multi-racial elections. White South Africans were willing to share power, but many black South Africans wanted a complete transfer of power. The negotiations were often strained and news of violent eruptions, including the assassination of ANC leader Chris Hani, continued throughout the country. Mandela had to keep a delicate balance of political pressure and intense negotiations amid the demonstrations and armed resistance.

Negotiation prevailed, however, and on April 27, 1994, South Africa held its first democratic elections. At age 77, Nelson Mandela was inaugurated as the country’s first black president on May 10, 1994, with de Klerk as his first deputy. In 1993, Mandela shared the Nobel Prize for Peace with de Klerk for their work towards dismantling apartheid and in 1995 he was awarded the Order of Merit. In 1994, Mandela published his autobiography, Long Walk to Freedom, much of which he had secretly written while in prison.

His authentic biography, Higher than Hope, was penned down by Fatima Meer. A longtime opponent of apartheid herself, Meer, who was banned and jailed with Winnie Mandela, acknowledges her personal commitment to the ANC’s integrationist program (as opposed to that of other groups, such as the separatist Pan-Africanist Congress), and though she sometimes portrays Nelson and Winnie in idealized terms, her account of their critical role in bringing an end to South Africa’s racial oppression is thoroughly engaging, informative and moving.

According to Los Angeles Times, Meer’s biography of Mandela delivers the story of a man whose every waking moment has been devoted to African liberation. Meer traces that struggle from 1941 when Mandela, then 23, arrived in Johannesburg to study law and immersed himself in the city’s progressive community of intellectuals and activists. “We were critical of the ANC,” he writes of the organization founded in 1912. “We felt it was out of touch with the masses.” Therefore, he and several friends established the African Youth Congress, their own militant wing of the ANC, which by 1949 was able to take control of the parent organization and move it from an ineffective “constitutional struggle” against government oppression to Gandhi-style non-violent, passive resistance in the successful 1952 Defiance of Unjust Laws campaign.

Under Mandela’s leadership, the ANC grew “from a few thousand to an estimated 100,000” by 1951. But two years later, the racist government responded with the Group Areas Act (reserving practically all urban and developed land for whites), the Bantu Education Act (aimed at giving African children an inferior education) and the Bantu Authorities Act (to control the movement of Africans); extended the pass system to include women, and passed legislation outlawing passive resistance. In 1954, the government banned Mandela from all ANC gatherings for five years.

Mandela has given hope to the oppressed humanity and demonstrated, through personal example, the virtues of tolerance and forgiveness; the two attributes of world’s great leaders. In his life, he was a world leader and in his death, his personal virtues and leadership qualities will guide the humanity for all times to come.

One thought on “Nelson Mandela; a shining star of the galaxy of history’s great people….”