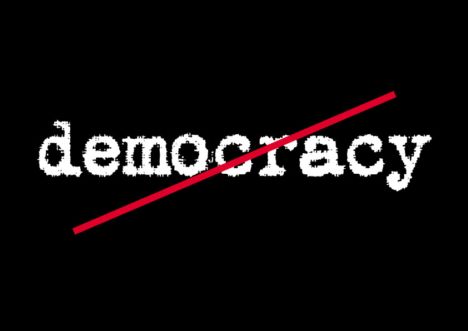 The five years’ period of loot and plunder by constitutional oligarchy may have bled the country to near death but the irreparable loss it has caused is to none else but democracy. The kind of kleptocracy which flourished in the last five years in the name of democracy has robbed the real democracy the respect and faith it deserved. According to a survey commissioned by British Council, Pakistan‘s population of young people has rejected democracy. Instead, they have placed their faith in military and Sharia rule. They are not interested in the exercise of elections and, if the social media dominated by young educated class is any indication, the most popular trend on Twitter is #Vote4None. According to British Council survey, more than half of young voters surveyed do not think democracy has benefited them.

Government, parliament and political parties are all held in overwhelming contempt by Pakistanis aged 18-29, while the army and religious organizations are the two most popular institutions in the country. The survey of 5,271 young people is a sobering reminder of the challenges posed by Pakistan’s peculiar demographics, where 46% of the population is aged between 15 and 29. This is the segment of society that all major political parties are trying to target through various means.

The survey found 94% thought the country was going in the wrong direction, with much of the blame laid at the door of the civilian institutions that have run the country since power was seized back from the army in 2008. It said 71% had an unfavorable opinion of the government, 67% of parliament and 69% viewed political parties unfavorably. By contrast, 77% of young people approve of the army, while 74% were favorable inclined towards religious organizations. Only 29% of young people believe democracy is the best political system for Pakistan. Military rule would be preferred by 32% and Sharia law by 38%.

The survey shows the primary youth concerns are economic, with people worrying about soaring inflation, a jobs crisis and poverty. Because fewer than half of young women are expecting to vote, the report branded housewives a “potential game-changer” if more of them could be inspired to take part in elections.

One thought on “Young Pakistanis view their politicians with contempt, says a survey….”