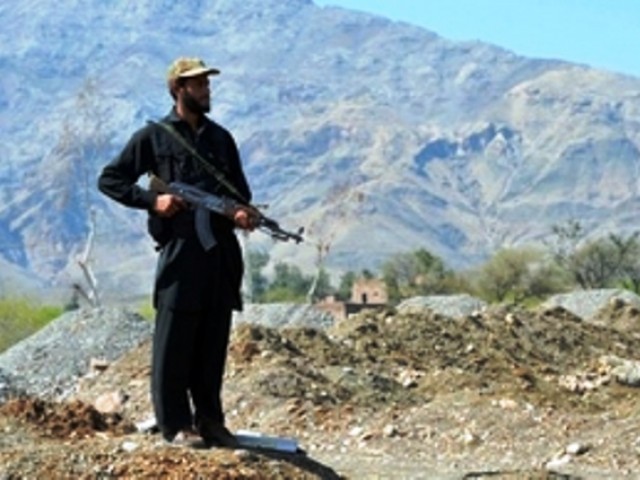 While the politicians and their hangers-on are preparing to go to polls on May 11, 2013, the brave sons of this nation are sacrificing their lives to safeguard the motherland in Tirah valley which is the latest safe haven of anti-Pakistan terrorists. Martyrs include the officers and men of regular army, para-military forces and brave sons of the valley. Those who have stashed billions to invest in the elections seem to be oblivious of what is going on in the backyard of Peshawar. The current fight with the Taliban going on in Tirah is one of the fiercest battles.

It was the right time to highlight and eulogize the sacrifices of young soldiers who are dying in big numbers to keep the evil away from Peshawar so that our political jokers can continue their election campaign in peace. These jokers, totally unconcerned about the loss of lives in last five years suddenly realized to appease TTP through negotiations. They only wanted their election rallies to be peaceful. They extended olive branch to the terrorists who refused to disarm as a pre-requisite to peace talks.

Tirah valley, though part of FATA, is not a remote location like South and North Waziristan. It is very next to Peshawar and if the Taliban onslaught in this valley is not stopped, there will be no stopping the killing beasts. The security establishment fully understands the gravity of this battle and significance of flushing out TTP terrorists from this area.

Originally started as a turf battle between Lashkar-e-Islam (a TTP proxy) and Ansarul Islam, it has turned into a full-fledged conflict of the scale that security forces have to intervene and save the valley from turning into TTP hands. Pakistanis who are being fed on hourly diet of weird anecdotes of elections, Article 62/63 and Musharraf’s so-called high-treason are being kept in dark by the media.

And the fighting is not about killing of terrorists and martyrdom of a few dozen soldiers; it has the collateral aspect associated with it and that is displacement of almost the entire population of this area. The displaced families, in many thousands, are seeking refuge in refugee camps and a host of agencies have been mobilized to help these people so cruelly dismissed as internally displaced people (IDPs).

According to latest news, at least 100 militants have been killed in a military operation in the area when Army seized control of strategic posts from the militants and ground troops established their positions. This achievement came at a price; 30 Pakistani troops were also martyred and another 13 injured fighting the joint forces of the Lashkar-e-Islam militia and the Pakistani Taliban (TTP) in Tirah valley. The high-pitch battle in Khyber agency’s Tirah valley started Friday, after the Pakistani Taliban occupied the valley last month, forcing an exodus of residents to Peshawar. According to U.N. estimates, some 40,000 people from the valley—most of them women and children—are now taking refuge in the capital of Khyber-Pakhtunkhwa province.

There will be no let up as fighting is expected to continue. The military has established its position on ground, and is advancing gradually with additional support from gunship jets and helicopters. The offensive in Tirah valley was necessary to ensure that the security situation in Peshawar and Khyber-Pakhtunkhwa province does not get out of hand ahead of the May 11 elections for Pakistan’s national and provincial assemblies. Control over Khyber agency is also critical to ensure the protection of supply lines used by U.S.-led NATO forces in neighboring Afghanistan.

Why is it that precious lives of young men are being lost to keep the likes of Bilawal, Moonis, Hamza and others safe to continue another bout of loot and plunder after a peaceful election? Do these scions of political families not owe any obligation to this nation? Why can’t one or all of them visit the field of battle, of course in secure motorcades, to raise the morale of those who have put their lives in danger? Those whom a former premier had described in contempt as “naukri pesha” (wage earners).

One thought on “Time to eulogize supreme sacrifices in Tirah Valley….”