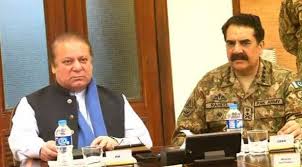 The sum-total of reaction shown by politicos is simple; it is army’s war; let them fight it and please leave us and our families alone to enjoy the fruits of power.

If Peshawar Tragedy of December 16, 2014 does not unite Pakistan against terrorism, extremism, political opportunism and anti-Pakistan media manipulation, nothing ever will. This was a gory incident in which more than a hundred school children, mostly those of soldiers fighting against the enemy, were butchered. The reaction in the civilized world was natural which was shocked and jolted. Pakistan’s arch-rival, India too showed as if it was saddened, totally oblivious of its establishment’s hand in this incident. And why not? This was an incident of its own kind never having taken place in the region.

The so-called Ummah was, however, conspicuous with its criminal silence as if it was business as usual for them. And the reaction to this incident is equally unique, and to some extent weird if we look at how Pakistan’s political class, politico-religious class and typical mullahs have responded to this incident.

The sum-total of reaction shown by politicos is simple; it is army’s war; let them fight it and please leave us and our families alone to enjoy the fruits of power. The fear of the terrorists has forced the political rulers to abdicate the real power in favor of the armed forces. The power to loot and plunder has, however, been retained. This is why people make massive investments to come into power. If you look at the official pictures of the Prime Minister in the past week, fear is writ large on his face.

Reaction of religious and political mullahs is largely measured. They have tried not to hurt the feelings of an overwhelming majority of people who were angered by the incident. These mullahs, at the same time, have tried not to be on the wrong side of Taliban terrorists. There is one exception, however. It is Mullah Abdul Aziz aka Mullah Burqa who established a terrorist sanctuary right in the heart of the capital. The media generally perceived to be anti-Pakistan has mellowed down a little but they have intensified veiled criticism of the armed forces.

The people at large have expressed their decision in no uncertain terms; It is our war and we are behind our armed forces like a solid rock. It is time the national unity is put to some constructive use before the foreign-funded media and opportunist politicians drive some wedge between people and the armed forces.

Error: Twitter did not respond. Please wait a few minutes and refresh this page.