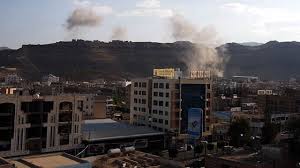 Iran is doing to Saudi Arabia in Yemen what the latter has been doing to Syria for a long time; fanning and funding armed resistance against incumbent regimes to bring the regime change. The lobbyists on both sides of the divide are trying to make us all believe it is sectarian strife in which one country is arming the rebels to topple the government of another sect. Nothing can be farther from truth in case of both Syria and Yemen.

While the government of President Assad of Syria may not be a true representative of the majority of people in terms of faith professed, none of the governments in the Middle East are true representative governments. Even the Arab Spring could not bring in representative governments and it passed after leaving the countries comprehensively devastated and destabilized. Although the totalitarian regimes in countries like Saudi Arabia survived the Arab Spring due to their alliance with the West, they have now started to feel the heat of the fire they stoked for attaining regional hegemony and for spreading their brand of Islam through terror. The demons like ISIS they created for their political interests are threatening their own survival.

Yemen is no Shia; so is its two-third population. Only one-third population professes Zaidi faith which is neither Shia nor Sunni though it is closer to Sunni faith which is evident from the fact that President Abdullah Saleh who ruled the country for three decades survived that long during the pleasure of the House of Saud. If he was a hard-core Shia like the Ayatollahs of Iran, Saudis would not tolerate him in their backyard for a second. If Iran is arming Houthi rebels as alleged, it is because it is an opportunity for Iran to settle scores with Saudis for what they did to Iran during Iran-Iraq war and on many other occasions.

It may be kept in mind that Yemen is no Syria. It is the poorest of the countries in the Middle East and has survived on Saudi hand-outs in the not-very-distant past. It was home to Al Qaeda in Arabian Peninsula (AQAP) and its deposed president Saleh is believed to have ceded a sizeable chunk of the country to AQAP in return for their support to keep him in power. The bid miserably failed, for Saleh because he had to cede the territory and at the same time he had to flee. It is widely believed that apart from Iran, he is also behind the unrest in order to reclaim his lost throne.

There are rumors that Pakistan has committed its troops to form part of an allied army of sorts to attack Yemen and quell the rebellion. First CNN broke this and reported PAF jets pounding Houthi rebels. After Pakistan denied, the channel had to retract. Then there was a news agency whose female reporter, widely known to hold anti-Pakistan views, reported that Pakistan was a part of the Arab coalition. Prime Minister Nawaz Sharif, under heavy debt of gratitude of the House of Saud to have hosted him during his time of exile, made statements which gave an impression that Pakistan Army was available for rent.

Despite this entire hullabaloo, there are some sound reasons that a sane establishment will not commit the mistake of landing Pakistani troops in Yemen. Pakistan will only honor its commitment to defend and protect two Holy Sites of Makkah and Madinah.

It should be kept in mind that Pakistan and Yemen are no different when it comes to internal security threats. Pakistan and Yemen have been ranked amongst top most dangerous countries of the world in a recently published IntelCenter’s Country Threat Index.  The criteria to dub a country as  a dangerous country is the volume of terrorist and rebel alerts, messaging traffic, videos, photos, incidents and the number killed and injured in a country over the past 30 days.

While Yemen is the 7th most dangerous country, Pakistan is not to be left behind; it is only at Number 8. Other countries in this club are Iraq, Syria, Nigeria, Somalia, Afghanistan, Libya, Ukraine and Egypt. All those included in this club, barring Ukraine, are Muslim countries.

It would be unwise to deploy troops to quell a rebellion in far-off lands when you have enough trouble already at hand. Take the example of Balochistan and Karachi where para-military forces, under the watch and command of the army, are engaged in deadly battles against separatists and terrorists. Then there is FATA where Operation Zarb-e-Azb is underway and to top it all is the Line of Control and working Boundary between Pakistan and India where the latter seeks opportunities to attack Pakistan and kill civilians. In these circumstances, it would be unwise for any prime minister, and also the army commander, to commit the troops for attacking rebels in a country like Yemen.

Pakistan cannot afford to become a party to the conflict because, in spite of evacuation, a sizeable number of Pakistanis is entrapped in war zone. Any misstep can jeopardize the safety and security of these civilians.

Pakistan has a history of respecting territorial integrity of sovereign states. It has not launched punitive strikes on safe havens of terrorists on Pakistan-Afghanistan border. How can it decide to land boots on ground in country with which Pakistan has no dispute?

Then there is Iran factor. If Iran is indeed behind the rebels as is believed, Pakistani boots on ground, even though to fight proxies, could lead to another cause of tension between two neighboring countries. Iran is already upset over slow progress of Iran-Pakistan Gas Pipeline project under American and Saudi influence. Then there is a sharp division within the country with majority, Shias and Barelvi Sunnis, apprehensive about Saudi Arabia’s designs. Any wrong decision can further polarize the society which Pakistan can ill-afford. It should be kept in mind that all those favoring Saudis are adherent to the violent Salafi-Wahabi Islam and all are armed to the teeth.

It should be kept in mind that after suffering terrorism for a decade (sectarian terrorism is much older) and losing thousands of lives, a vast majority of Pakistanis have started to believe that Saudi donors behind these terrorists’ outfits are a cause of Pakistan’s trouble. Pakistanis have deep regard for the Arabia where their Holy Mosques are located but they have least regard for the Royal Family who they consider solely responsible for destroying the social fabric to spread their own brand of Islam.

It is increasingly becoming clear to everyone that current situation in Yemen doesn’t threaten territorial integrity of Saudi Arabia. What is under threat is the Saudi overlordship in Yemen; Yemenis have seen the light, have been through corrupt and repressive regimes and are no longer ready to accept Saudi tutelage for ever. This situation threatens status quo in the Middle East and doesn’t force Pakistan to play stupid games.

For these reasons, no sane government will deploy its troops to Arabian Peninsula for attacking a sovereign country. Defense of Holy Sites is a different matter altogether.