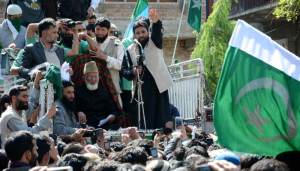 If we calculate carefully, Syed Geelani’s snub is a huge price for the meekness that Pakistani leaders demonstrated at Ufa.

Syed Ali Geelani, the most respected leader of Kashmir Freedom Movement has snubbed the government of Nawaz Sharif and refused to attend Eid Milan at Pakistan High Commission at New Delhi. This snub is a huge personal embarrassment for Nawaz Sharif who is widely perceived by Pakistanis and Kashmiris to have sold out the issue of Kashmir at Ufa for some unspecified personal quid pro quo.

If we calculate carefully, Syed Geelani’s snub is a huge price for the meekness that Pakistani leaders demonstrated at Ufa, Russia.

Recently, there was a demonstrable surge in the movement when Kashmiris flew Pakistan’s flag everywhere possible. If the huge rallies organized by Kashmiri leader Syed Ali Geelani, where pro-Pakistan chants were raised are any indication, Kashmiris have rejected Indian occupation with contempt. Pakistan is committed to provide at least moral support to this freedom struggle and Pakistani leaders, without exception, have been raising the issue of Kashmir at every international forum.

However, when Prime Ministers of India and Pakistan met on the sidelines of Shanghai Cooperation Organization’s summit meeting at Ufa in Russia where both countries were granted full membership of SCO, the meeting turned out to be a disaster from Pakistani point of view but it was a huge success for Indians.

The reason for this pessimism is the joint communiqué issued after the meeting which is blatantly one-sided. India succeeded in bringing under increased focus the Mumbai attack of November 26, 2008 while Pakistani side was so unnerved that it totally forgot about making a mere mention of the K-word what to talk of Indian meddling in Pakistani affairs in stark violation of all international norms. It seems from the communiqué as if the meeting was between Prime Minister Modi and India’s anti-Pakistan ally.

Kashmir is not the only thorny issue which Mr Sharif could not raise; he lost his nerves to even make a mention of India’s sponsorship, funding and arming, of terrorism in Pakistan. It is believed that Pakistan is in possession of solid evidence against India which it had planned to place before the UN.

What went wrong in Mr. Sharif’s mind is anybody’s guess but his weird attitude during his meeting with Indian counterpart explains that he had totally surrendered to Mr Modi when he had all the reasons to hold his head high. It was reported by Pakistani media that the Prime Minister clearly avoided Pakistani media during his recent visit to Russia which led to the success of Mr Modi, who kept the meeting, according to the communiqué issued after the meeting, focused on the Mumbai terror attacks and terrorism afflicting the region, but also of the Indian media which, in its coverage, successfully built the narrative in their country’s favour.

Compare this with Musharraf’s Agra Summit of 2001. The military leader demonstrated bold leadership and skillfully used the media to checkmate his counterpart in India. He even played the theatrics of walking out of summit on the question of centrality of Kashmir issue which india reneged on acknowledging.

Mr Sharif’s meek posture emboldened Indian media to depict this disastrous meeting as a victory of PM Modi for highlighting the Mumbai terror attacks in the joint statement which contained no mention of Kashmir and tension along the Line of Control and the working boundary from the Pakistan side. While Pakistani media was literally struggling to know what actually transpired during the meeting, TV reporters from India were having a field day, providing live coverage of the huddle.

The price of this disaster for Pakistan and Kashmir cause is huge. In spite of fighting terror through Zarb-e-Azb and sacrificing thousands of lives in India-sponsored terrorism, Pakistan was made to act defensive because of its weak leadership. Not only Pakistan lost another golden opportunity to raise its concerns at a global forum, it conceded to India so shamelessly that India’s claims about self-engineered terror incidents started to sound convincing. Nawaz Sharif has again conceded through his meek posture that Pakistan is a real bad boy in the region.

What could be the possible quid pro quo for demonstrating this meekness and creating a royal mess for Pakistan at Ufa? Is it the business interest of the royal family of a so-called democratic Pakistan who has chosen India to invest their Pakistani money? It is no more a game of wild guesses because things are unfolding at a faster pace.

In this backdrop, the contempt that the Sage of Srinagar has shown for Pakistan’s foreign policy is not directed against Pakistan; it is for Nawaz Sharif. It is to insult and embarrass him personally.