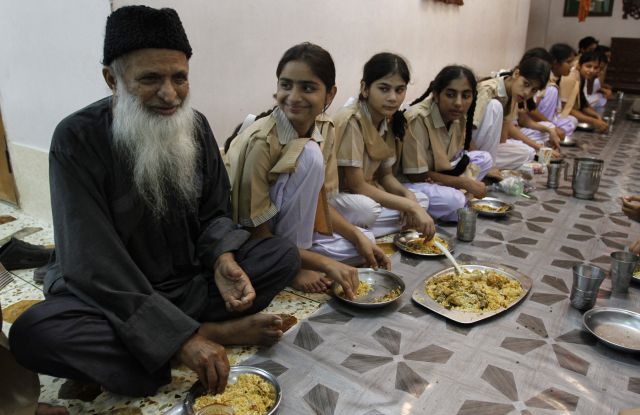 Mullahs’ religious decrees against Edhi were not issued for religious reasons; these were motivated by corporate interests of madrassas threatened by philanthropy.

Religious seminaries, called madrassas, were established in the Sub Continent to impart education in theology. The seminaries were few and far between and were managed by those men of letters whose academic credentials together with moral and economic integrity was above board. Not all who graduated from these seminaries devoted themselves to religion; some of them even joined mainstream and made valuable contributions in many fields. The economic condition of these seminaries was largely volatile and sources of revenues consisted mainly of donations. The teachers were underpaid and the managers didn’t look at these institutions as cash cows.

With the passage of time, the seminaries, like educational institutions in private sector, assumed a corporate style and became a unique system of Religious Capitalism. It has now its own haves and have-nots. As the revenues streams surged, seminaries proliferated and it became a rewarding business. It created three classes; owners, employees and students who would eventually become teachers in these seminaries as the education imparted was irrelevant to the society.

Owners are the religious elite, a kind of bourgeoisie, who receive donations from legitimate and illegitimate sources and refuse transparency; teachers are underpaid and exploited because they have no other economic opportunity. As for the students, they are drawn from poorest strata of society because their parents can’t afford to feed and clothe them, let alone provide education. In addition to economic compulsions, these students and their parents are exploited in the name of divine rewards and retribution. The poor children are today the sole bread-winners of this religious capitalism but they have no share in the revenues except food and shelter and some lessons in theology which they call religious education. The disgusting sights of these kids kept in chains and shackles speak volumes about the quality of education at these seminaries and the major focus of the owners.

Thus a corporate world of madrassas was created with a proper corporate governance system. Almost all the entities, despite receiving donations from individual and governments at home and abroad including foreign governments, are family-run and family-owned enterprises. They expand and multiply and enrich the owners. The mullahs owning these madrassas are fat-cats of the society and live the life of luxury.

Like other businesses, the madrassa sector has its own strengths, weaknesses, opportunities and threats (SWOT). While poverty and religious illiteracy are major opportunities, philanthropists working for improving the conditions of humanity are a major threat for the corporate interests of these madrassas. These philanthropists effectively share the pie which clergy claims to be the right of their seminaries.

Madrassa education with 7th century curriculum assumes priority over other things because the causes such as health, education and general uplift of poor masses cut no ice with mullahs.

They believe, and also make us believe, that those who are underprivileged under divine arrangement should remain so and it would be next to blasphemy to disturb this arrangement. These mullahs have mocked, ridiculed and even abused Abdul Sattar Edhi, the greatest philanthropist of our times, with worst invectives and declared him heretic for serving the humanity without discrimination.

Thus, if the madrassa elite of mullahs has issued religious decrees against Abdul Sattar Edhi, it is not for religious reasons; these decrees are motivated by economic interests of mullahs threatened by philanthropy. The best part of this is that people are, as was Edhi himself, not pushed by these decrees. Edhi has rightly assumed the status of a saint in the hearts and minds of people of this planet. And that is something which defeats religious exploitation of hapless majority of Pakistan.