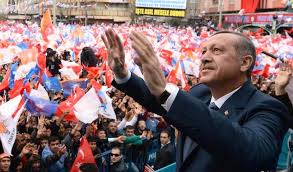 His turns and U-turns are all meant to lead him to his dream destination; Sultanate of Turkey. He wants to have absolute powers of a monarch at any cost.

Turkey, the jewel of Muslim world prior to the stage-managed coup of July, 2016, is being pushed into a bottomless pit of anarchy by the Wannabe Sultan of Turkey, President Erdogan. Ever since the failed coup failed, Erdogan is working overtime to consolidate his grip on power, purge the institutions of the people suspected to pose some semblance of a threat to his Caliphate ambitions and assume an aggressive posture to win him laurels in the Muslim world, which for the last many centuries is waiting for a Messiah. Will his dreams to become judge, jury and executioner in Turkey and an international icon of resistance to America’s high-handedness actually come true? This is a moot question which doesn’t beg for detailed deliberations to reach an answer. The answer is clear: Anything done with insincere motive is bound to backfire for the deed doesn’t sustain and is eventually exposed.

President Recep Tayyip Erdogan rose from Istanbul’s mayoral office and worked his way through the corridors of power to reach Ankara. As a powerful prime minister, his next stop was the presidential palace. According to Turkey’s Constitution, the president is more or less like the Queen of England, only a figurehead. Even if he enjoyed more powers than the Queen, it is still not an executive presidency. Erdogan has been working very hard to convince other political parties to extend support in order for him to amend the Constitution and transfer all powers to the president when he took over. They were hesitant because this would mean destroying the basic structure of the Constitution and shredding those pages which assure some form of democratic dispensation for the country. Erdogan wanted to be an all-powerful Sultan of 19th Century or at least like an Arab monarch while his country is next door to democratic West.

The outcome of the July coup made it suspect from the word go; it provided Erdogan all powers he needed to crush dissent in any form. In effect, he was the sole beneficiary of a failed coup. Even when the coup was underway, he had kick-started his crackdown. On July 23, he closed thousands of charities and private schools. A restructuring of the military was also in the cards. 35% (124 of 358) of the generals and admirals in Turkey’s armed forces (TSK) were arrested immediately. In the process of purges and crackdown, Erdogan had to deal with some possible spoilers like democracy itself, professional armed forces, independent judiciary and free-thinking intelligentsia.

Despite consolidating powers, Erdogan is failing miserably to manage Turkey which according to The Telegraph is in a uniquely awful position. It now has the strongest president since the military coup in 1980, possibly since Ataturk himself ninety years ago. But President Erdogan’s extraordinary skill in consolidating his power has not been matched by an ability to solve the country’s problems. While Erdogan was drawing together all the threads of authority in his hands in a still democratic Turkey, random killings, suicide bombings and civil war with the Kurds in the south-east have been spiraling out of control.

Media is the latest target of his wrath for exposing the corruption and wrong-doings of his colleagues and family.

Turkey is a very precious country, a military power and a growing economy. But Erdogan’s iron-fisted rule is all set to push it to the brink of anarchy. There are very strong perception about him to be hands-in-glove with terrorists who have destroyed peace in the Middle east, particularly in Syria. His turns and U-turns are all meant to lead him to his dream destination; Sultanate of Turkey. He wants to have absolute powers of a monarch at any cost.